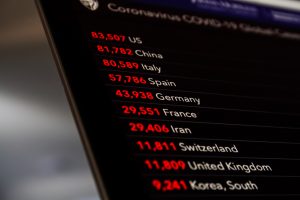 U.S. President Donald Trump faces a major challenge after the spread of the Corona virus in the United States. But the absence of a clear plan puts Trump in an ambiguous position to get out of the crisis. This confusion shows the United States is divided, especially with the failure of the US Congress to reach an agreement on a massive recovery plan worth about two billion dollars.

After diminishing for weeks the importance of the health threat posed by the epidemic or even underestimating him and then presenting himself as a university president in a country “at war”, US President Donald Trump is intensifying unclear messages about the restrictions imposed to limit the spread of the Corona virus.

Trump sends ambiguous or sometimes even vague messages in countries facing the rapid spread of the Corona epidemic, vacillating between calls for national unity, retaliatory tweets, and electoral accounts

This swing showed the richest country in the world in a scene highlighting division. The federal government and the states are progressing disorganized, and Democrats and Republicans are trying hard to reach an agreement on a massive recovery plan worth about two billion dollars. The Senate’s efforts on Monday once again failed to pass this plan.

If the search for a balance between the public health goals and the economic continuity of the country constitutes a legitimate discussion, the way in which the American president intensified the initiatives without clear cohesion leaves his opponents, as well as some of his allies, in a state of surprise.

“We cannot allow the treatment to be worse than the problem itself,” Trump said on Twitter on Sunday night. “At the end of the 15-day period, we will take a decision on the path we want to take,” he said, without any clarifications on what he intends to do in the coming crucial weeks. The White House last week presented a series of recommendations collected in a document titled “15 Days to Slow Spread” of the virus.

“The situation will get worse.”

For its part, the US health authorities send a clear message: “The worst is coming in the United States.” In the absence of medical treatment, the only option to defeat the virus is to maintain as tight restrictions as possible on movement.

It is noteworthy that there is an American out of three who are included in the isolation measure announced by state governors.

If the delay in conducting tests made it difficult to assess the extent of the virus on American soil, its outbreak is now of concern.

“I want America to understand: This week the situation will get worse,” Jerome Adams, a public health official, told NBC. After expressing his regret that some Americans do not respect the rules of social exclusion, he called for the adoption of more rigors in implementing the procedures with a clear message, “Everyone must really stay in their homes.”

While the president appears unwilling to surrender to halt his campaign, his stance contrasts sharply with that of New York State Governor Andrew Como.

With his calmness, clarity and candor, but also his sympathy and sensitivity in advising his fellow citizens, Andrew Como has become a pivotal figure in fighting the Corona epidemic in the United States, bypassing his New York jurisdiction.

In response to a question about the president’s nightly tweets, he declined to criticize but clearly stressed the radical decisions taken in New York to stop the virus from spreading.

“I am fully aware that this state or these countries cannot be managed with a closed economy for a long time,” he said, “but is there a public health strategy that gives better results and is less damaging to the economy?” Stressing that his team is working hard on this file

“I think there is a point where these two lines meet, and they must be identified,” he concluded.

To date, Donald Trump continues his unilateral behavior, speaking almost daily to the hypothesis of a discovery of treatment soon “changing data” without scientific accuracy.

In the face of this unprecedented health crisis in modern political history, did the president consider asking his predecessors’ opinion as they themselves did when the country witnessed terrible natural disasters?

The 45th President of the United States replied in the negative, saying, “I think we are doing exceptional work. I don’t think I’m going to learn a lot of things.”

David Axelrod, a former adviser to Barack Obama, says the day-to-day procrastination in the United States during the presidential press release bears strong questions about the largest power in the world and the challenge it faces in light of this presidential behavior.

The biggest problem during the Corona virus crisis is that it is the first time that Trump has faced a challenge that he has little power to influence. The result was a series of changing situations.

How countries manage crises economically because of Corona